The Federal Reserve’s (Fed) policy committee starts its sixth two-day policy meeting of the year today. At 2:00 p.m. ET Wednesday, following the meeting’s conclusion, the Fed will announce its rate decision and release a brief policy statement, accompanied by new economic projections. This will be followed by a press conference by Fed Chair Jerome Powell.

As shown in the LPL Chart of the Day, Market Widely Expects A Second Rate Cut On September 18, the Fed is widely expected to lower its policy rate 0.25% to a target range of 1.75–2%, following the first cut of the cycle in July. With a 0.25% cut largely baked i

Equities continued to rise this week, sending the S&P 500 Index back over the 3,000 level and near its record high of 3,027.98 set July 26. Easing trade fears, bold measures from the European Central Bank (ECB), and strong retail sales all helped buoy investment sentiment.

The United States granted China a two-week reprieve for previously announced tariff hikes as a goodwill measure ahead of the 70th anniversary celebration of the People’s Republic. China responded with some tariff exemptions and re-committing to U.S. agriculture purchases. News that the Trump administration is considering an interim trade deal added op

The Curious Case of Negative Yields

There’s a growing pile of negative-yielding debt around the world amid extraordinary monetary policy initiatives. While maintaining respect for global money flows, we believe the combination of economic fundamentals, domestic monetary policy, and a widening federal budget deficit limit the prospects for sub-zero yields in the United States.

Fixed income investing has traditionally been regarded as a stable source of yield for suitable investors. One party lends another party money, and the lender receives interest in return for the risk incurred by providing capital.

A New High in CPI Growth

In August, the core Consumer Price Index (CPI) increased at least 0.3% for a third straight month, the first time that’s happened since April 1995. As shown in the LPL Chart of the Day, core CPI rose 2.4% year over year last month, one of the fastest paces of growth in this economic cycle. 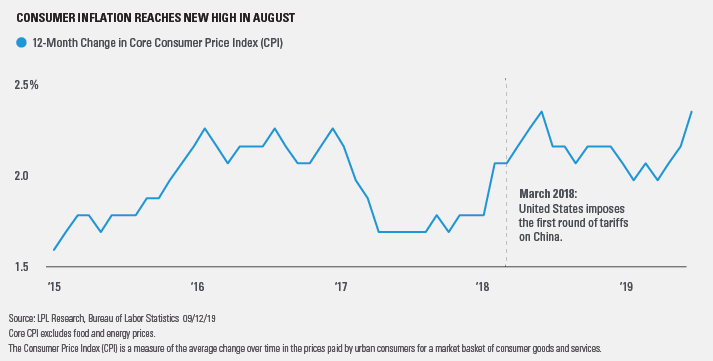 Gauges of consumer inflation slowed earlier in 2019 as trade uncertainty weakened global demand. Then, consumer spending picked up and the United States continued to in