Just like that, the S&P 500 Index fell more than 1% on the first day of October. The rough start has many investors on edge, as October is known for spectacular crashes—specifically 1929, 1987, and 2008.

On the flipside, September 2019 was historically calm for equity markets, as the S&P 500 didn’t fall 1% on a single day the entire month.

“The lack of any volatility in September could mean the usually volatile month of October could be due for some big swings,” said LPL Financial Senior Market Strategist Ryan Detrick. “The good news, though, is while October has had a bad rap fo

U.S. manufacturing activity fell to a 10-year low, dragged down by a weakening global economy.

The Institute for Supply Management’s (ISM) Purchasing Managers’ Index (PMI) fell to 47.6 in September, the lowest level since June 2009. As shown in the LPL Chart of the Day, the gauge stayed in contractionary territory (below 50) for a second straight month. 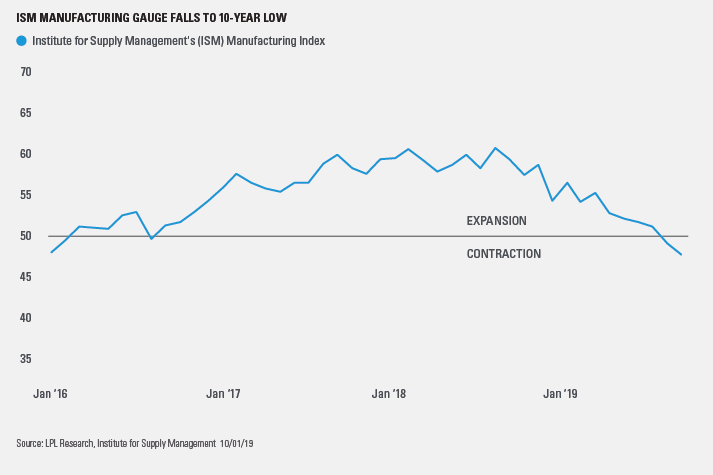 What Does an Impeachment Mean for Stocks?

Speaker of the House Nancy Pelosi announced last week that she would support an impeachment inquiry into President Donald Trump. We’ve received many requests from our LPL advisors asking what exactly this may mean for the stock market, and here’s what we found.

Impeachment inquiries can cause a good deal of volatility, as stocks fell as much as 20% ahead of President Bill Clinton’s impeachment inquiry that began in October 1998, and we saw the vicious bear market of 1973–74 during the impeachment process against President Richard Nixon.

Of course, the Russian ruble crisis and the failure of he

The U.S. economy continues to perform well when compared to the rest of the developed world, and is still exhibiting growth near its long-term trend. The outlook in other developed economies is not quite as bright, however, as unconventional and aggressive policy decisions from global central banks are becoming increasingly ineffective.

The United States and emerging markets still stand out to us as relatively more attractive investment opportunities than developed international markets, based in large part on relatively stronger outlooks for economic growth and corporate profits. The outlook for emerging markets de