Weekly new jobless claims were reported this morning, and to no one’s surprise they rose to levels thought unimaginable just a few weeks ago. As shown in the LPL Chart of the Day, 3.3 million people filed new claims for unemployment benefits in the week ending March 21, almost 5 times the previous high of 695,000 set in 1982.

“The personal and economic disruptions represented by the latest new claims number are staggering,” said LPL Chief Investment Officer Burt White. “This is a genuine human crisis, and a robust response from the Federal Reserve and Congress seems appropriate. Unfortunately, we do expect

We’ve been monitoring the details in our Road to Recovery Playbook closely over the past few weeks, looking for ways to opportunistically take advantage of the sharp pullback in equity prices. The Playbook has five important factors we are scrutinizing in order to be more aggressive with equity allocations. One of those factors emphasizes whether we believe there are limited sellers remaining. For clarity on that particular factor, we reviewed recent statistics from Morningstar on fund flows, and we found some interesting observations.

As shown in the below chart, investors have acted as if money markets are king, essential

The COVID-19 pandemic has caused unprecedented volatility in recent weeks that has investors and traders scrambling to assess the economic and market impact of the aggressive containment measures.

This past week the CBOE Volatility Index (VIX), which measures the implied 30-day volatility of the S&P 500 Index based on options contracts, measured its highest reading since its inception at over 82—besting the prior high set during the financial crisis in 2008-2009, shown in the chart below. That is saying something. 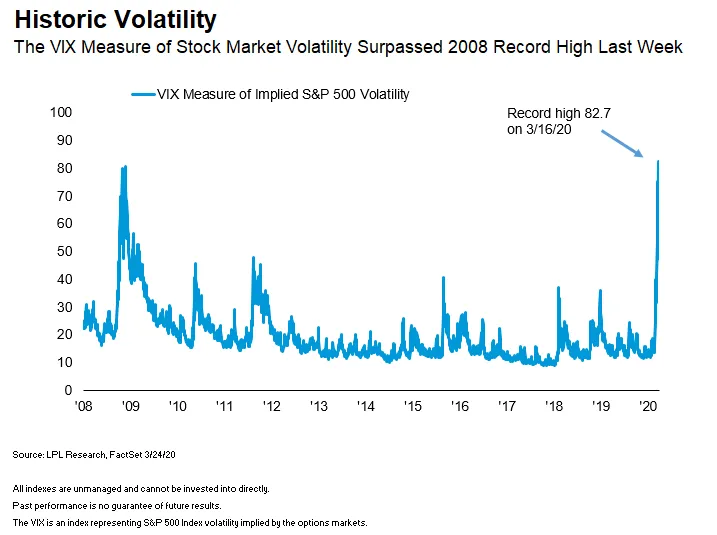 The incredible volatility continues, with the S&P 500 Index now in one of its worst bear markets ever, along the way making the quickest move from an all-time high to down 30% at only 22 days. What is a long-term investor to do?

“Although market timing is very alluring to investors, especially after the past few weeks, the reality is timing things incorrectly can set you back significantly,” explained LPL Financial Senior Market Strategist Ryan Detrick. “In fact, if you started in 1990 and missed the best day of the year each year for the S&P 500, your annual return was nearly cut in half.”