Consumers Open Up Their Wallets

U.S. consumers continue to open up their wallets, according to the October retail sales report.

Retail sales rose 0.3% last month, the measure’s seventh gain in eight months. Retail sales’ rise was led by a 1.1% gain in gasoline store sales and a 0.9% increase in sales at “non-store retailers.” Furniture and clothing sales dropped the most of all categories. Control group sales, which we view as a cleaner measure of retail sales’ contribution to gross domestic product (GDP), rose 0.3%.

Data on consumer activity is especially important to watch these days. Consumer spending has powered th

The long wait may be over. No, we aren’t talking about a U.S.-China trade agreement, though that may come before the end of this year. The two sides continue working on a few sticking points.

We’re talking about stabilizing global growth, which has been elusive over the past two years.

Global manufacturing surveys for October point to improvement. The JPMorgan Global Manufacturing Purchasing Manager’s Index (PMI) has increased three consecutive months to within an eyelash of the key 50 level, marking the breakpoint between expansion and contraction.

Consumer inflation continued at a moderate, but manageable, pace in October.

As shown in the LPL Chart of the Day, the core Consumer Price Index (CPI), which excludes food and energy prices, rose 2.3% year over year in October. That’s slightly lower than September’s 2.4% year-over-year growth, which was the fastest pace of the economic cycle.

Core CPI tapered off last month, but inflationary pressures have recovered noticeably since slowing earlier this year. Core CPI has increased at least 2.3% year over year for the past three months, the first time that’s happened since May 2012. 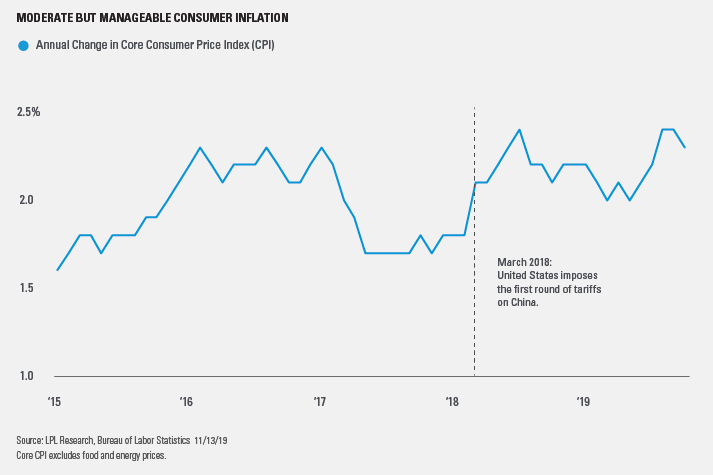 Putting the Bull in Perspective

The S&P 500 Index has closed higher five consecutive weeks, making six new all-time highs along the way. There now have been 19 new highs in 2019, tying the number we saw last year.

There’s no doubt that this bull market has been incredibly impressive, especially lately. But, it may also be quite misunderstood.

For instance, this bull market has been helped by two large pullbacks along the way. There have been two separate 19% plus corrections for the S&P 500 over the past 10 years, in October 2011 and in December 2018. While the selloffs were swift and deep, the S&P 500 didn’t fall more than