The economic expansion just turned 10 years old, tied for the longest on record, according to the National Bureau of Economic Research. It’s only fitting with this milestone that economic skepticism is peaking once again. Many investors, especially in the bond market, have been bracing for an economic slowdown and calling for Federal Reserve (Fed) intervention as global trade disputes rattle financial markets [Figure 1]. 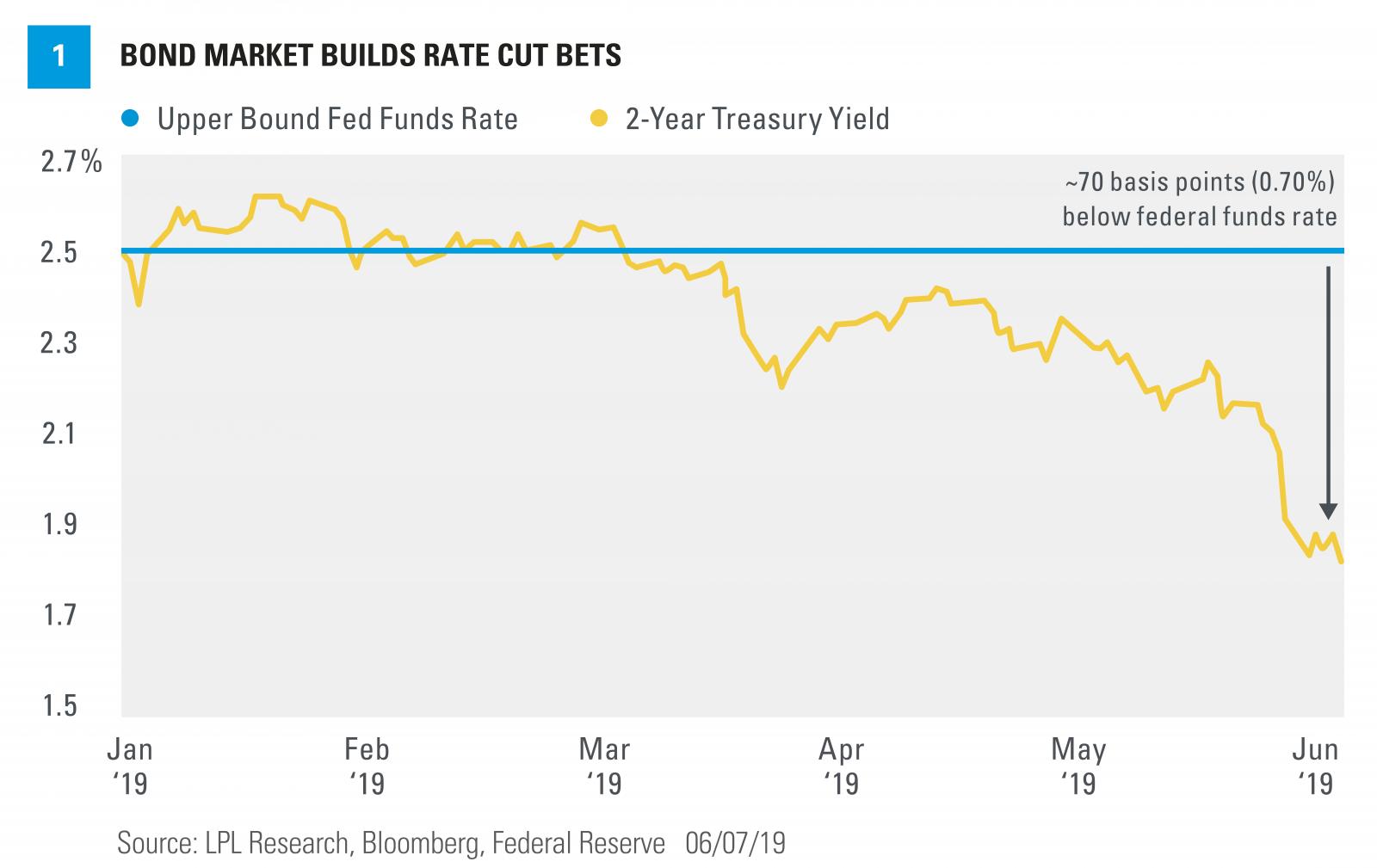 The trade situation is unnerving, and we’re aware an escalation could eventually wear on an aging expansion. It’s important to remember, though, that with sound fundamentals and a measured Fed, the U.S. economy has navigated several global crises in this cycle. We think both supportive factors are still in place.

The current economic expansion has been slow and mostly steady, a feature that has led to its longevity. Real gross domestic product (GDP) has grown at an average rate of 2.3% since the expansion began in June 2009, the slowest inflation-adjusted pace for all expansions since the 1970s. Growth over the past several years has been hampered by bouts of global volatility: the European debt crisis, the U.S. debt downgrade, and the collapse of oil prices (to name a few). Conditions felt dire in each crisis, but the U.S. economy powered through each time.

May’s weaker-than-expected payrolls growth stoked fears that trade tensions had finally infiltrated labor markets. Nonfarm payrolls rose by 75,000 in May, according to the jobs report released June 7, far below consensus estimates for a 175,000 increase. Job gains for March and April were also revised down by 75,000.

Even though it’s tough to be optimistic about the May jobs data, we don’t see the data as a reason to panic. Payroll gains have averaged around 200,000 per month over the last year, a solid pace for this point in the cycle, and slowing job creation is typical for a tightening labor market [Figure 2]. We also see strength in other job-market indicators, showing that the May stumble in payrolls may not be as disappointing as it was at first glance. 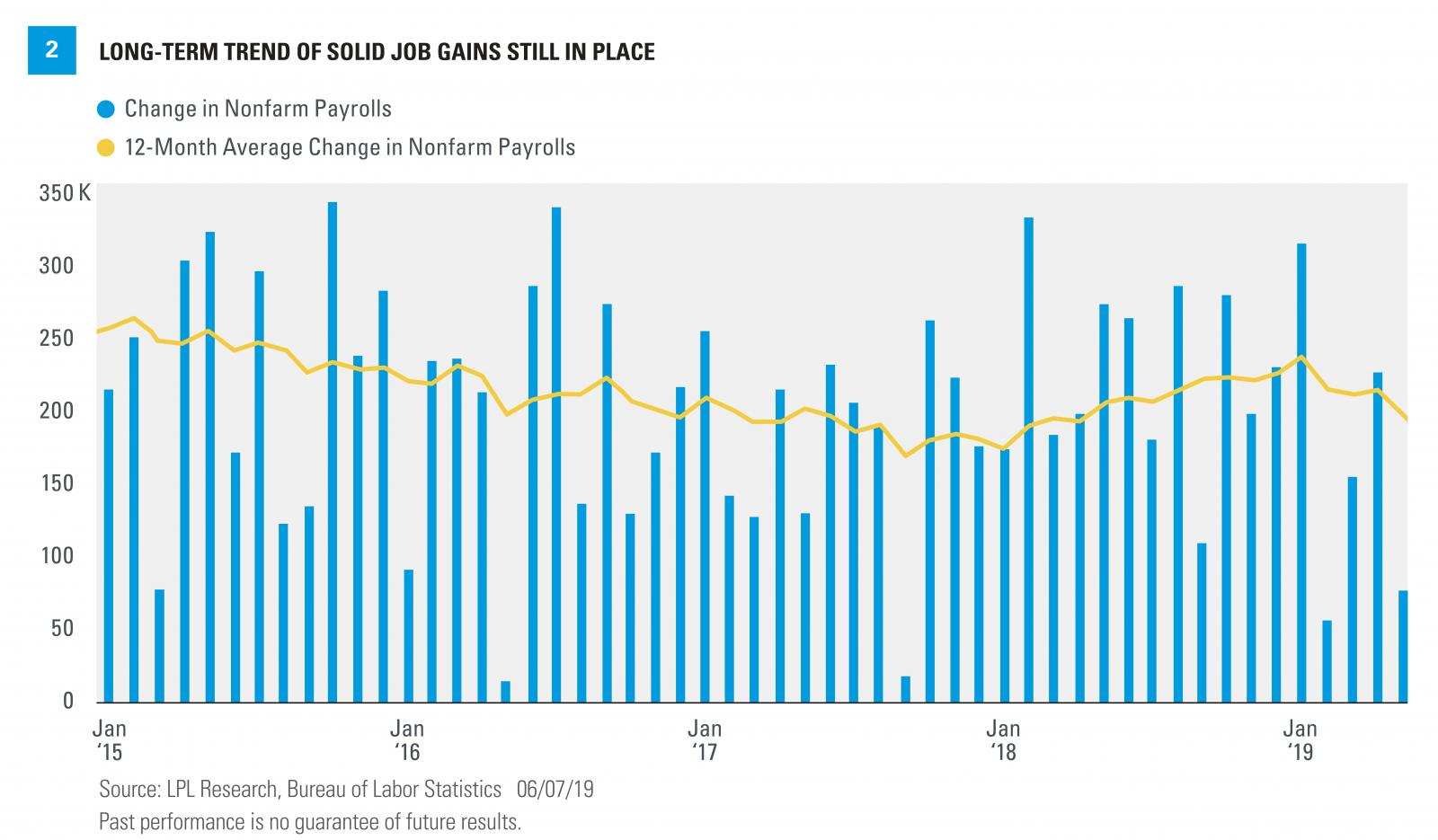 Manufacturing data released last week were more concerning, as the Institute for Supply Management’s (ISM) Purchasing Managers’ Index fell to the lowest level since October 2016. Even though we’d like to see more manufacturing strength, we’ve seen this story play out before. The ISM gauge has dipped into contractionary territory (below 50) three other times in the current expansion. Each time, manufacturing rebounded as global issues were resolved.

Economic data were a little shaky last week, but the Fed swooped in to calm investors’ nerves. On June 4, the S&P 500 Index rose the most since January after Fed Chair Jerome Powell commented that policymakers “will act as appropriate to sustain the expansion” in light of recent trade developments. Investors interpreted this as the Fed’s willingness to cut rates if needed, although his words were vague enough for us to think they were more of a communication tactic than a commitment to a policy change.

On balance, economic data haven’t deteriorated enough to warrant a Fed rate cut, in our view. However, there have been signs that growth could slow over the coming quarters, and trade uncertainty may be the primary risk to an otherwise solid economic outlook. The bond market also has signaled increasingly that policy may be too tight for an economy hampered by a drawn-out trade dispute. Eventually, the Fed may have to intervene by lowering interest rates.

If the Fed cuts, investors should view it as a course correction and not as a decision to get ahead of an imminent recession. It hasn’t been unusual in the past for the Fed to adjust its rate path within an expansion when global events, the economy, or markets signal rates are too high for the current environment. A course correction, or rate cut after policy tightening, has been more typical than what recent history shows. In the last economic cycle, the Fed’s first course correction didn’t occur until about four months before the recession started in January 2008. In every other expansion since 1970, however, the Fed has made at least one course correction in the first half of the cycle.

Wall Street’s favorite analogy for this environment is the 1995 “insurance cut,” when the Fed cut rates by 25 basis points (0.25%) twice that year amid fears of overtightening. At that point, the expansion was four years old, and growth was moderating (but still solid). After the Fed’s first cut in July 1995, the expansion lasted almost six years longer. Six more years for this expansion would be a surprise, but we see several similarities now to the environment that existed during the 1995 rate adjustment.

The expansion has reached its 10th birthday, thanks to one of the slowest recoveries in history and a steady stream of accommodative monetary policy. Right now, we see fundamentals that are sound enough to avoid a recession. Monetary policy is at its tightest point of the cycle, but Powell’s comments this week reminded us that the Fed is mindful of trade-related economic consequences and willing to be flexible to keep growth stable.

After 10 years, it’s not surprising that we’re seeing signs we’re late in the economic cycle. History has proven, though, that later-cycle economies can continue to exhibit stable growth for years. We’ll continue to watch trusted economic and market signals for threatening signs of slowing or excesses.


Back to all articles »